Swedish cleantech enables recycling energy from restaurant ventilation systems. The device is a self cleaning recovery battery – completely free from filters – that recycles energy out of the exhaust air.

Enjay is the company behind the product Lepido, its first innovation which was launched in 2018.

–The waste of energy among the around 15 million restaurants in the world is enormous, as the majority of the generated energy remains unused. Using Lepido, every restaurant recovers av average of 85.000 kWh annually, says Jesper Wirén, CEO and founder of Enjay.

Burger King Sweden is the first chain of restaurants in the world to fully implement the new technology. Fours years ago, Burger King installed its first Lepido system as a trial in a restaurant in the south of Sweden. Now, the system is set as a standard for every new restaurant in the chain in Scandinavian.

The energy cost for heating the restaurant is cut in half. When all 250 restaurants in Scandinavia have been converted, the annual emission of CO2 descreases by 625 metric tons.

–When you read something that sounds too good to be true, it usually is. But with Lepido, the opposite appies. The system works much better than expected, says André Veie Engh, Master Franschise of Burger King Skandinavien.

In the late 1990s, Jesper Wirén and his partner started the company UV-Tech, developing purification by UV-light, but after a whole Jesper moves on to a new ventilation company.

–Gradually I discovered that the customers were very much aware of all the energy gong straight out into the air. Me, my collegue Nils and Swegon were convinced that neither UV or other media were efficient enough and also were associated with too high costs of maintenance for energy to be recovered, he says.

The insight that they were selling something the market did not really wanted got them thinking. Jesper and Nils decided to crack the code. However, a sufficiently effective filter could not be found or imagined, eventually making the duo revert the solution.

–You could say that we solved the problem by avoiding the problem. By excluding filters altogether and creating a stalwart recovery battery capable of operating in the challenging environment of a restaurant, we managed to recover the energy, Jesper says.

Thus of of the patents is situated in the battery section. The solution is based on aerodynamics; the battery has no flanges but instead utilizes coils containing water mixeed with glycol. Its design makes most of the particles go past – like the wing of an airplane – and sent straight out. The actual energy in the exhaust air, however, is recoverd in the coils of the battery.

The few, heavier particles that nevertheless do get caught on the coil, are purged by an automatic self cleaning process. When necessary, the temperature of the brine is lowered to below freezing overnight, making the condensation on the coils turn to ice and lowering the adhesion of the particles of dirt. As the temperature slowly increases again, the layer of ice melts and gathers the particles as the water drips off the coil. Then, the water and the particles of grease are led into the regular system for separating grease.
–The technology was also not patented. We had an epiphany when an evening BBQ had to be cancelled because it rained and a platic bag full of meat was placed in the fridge. The next day, the marinade and its grease were in the bottom of the bag, Jesper tells.

Thus, the technology does not start the system, but keeps the pressure high to recover the energy. The ventilation system is kept clean enough, but will probably have to be cleaned with hot water after several years.

–The system at Burger King, shich has been operating since 2016, is still as efficient, Jesper says.

Many uses for energy

The exhaust air is led into a storage tank from where it can be utilized as pre-heated tap water, heating, colling or air conditioning and heating – as well as anything else to be heated. For example, a hotel in Gudbrandsdalen in Norway uses the recovered energy to heat its swimming pool. At a recently opened Burger King restaurant in the Swedish city of Östersund – a region with large variations in temperature - the installment is saving 100.000 SEK (10.000 USD) annually by recycling the exhaust air. Here, the energy is utilized for everything from tap water to cooling.

Jesper notes that this manner of recycling also enables tremendous conservations of the environment, but that environmental concerns themselves are not enough of a selling point.

–Thus, it is vital to know that the investment on average is repaid in around two years, he says.

Depending on its size, Lepido costs from 180.00 SEK (18.000 USD) to 1.5 milljon SEK (150.000 USD) for large scale facilities such as hotels or shopping malls. The limit where Lepido is profitable is somewhere is in the vincitity of a 700 litres per second airflow and eight hours of daily operations.

The installation is two-stage. Initially, the battery section is inserted into the ventilation shaft, which may be done during the night. Installing the heat pump and plumbing may last one to two weeks, but the restaurant is not forced to close its operation during this time.

–For many years, people have been trying to solve the problem of recovering greasy exhaust air. Hence I would point at the positive experience Burger King has of our product and that the RISE research institute has researched the different possibilities of recycling and found that neither UV or ozone based solutions are functioning well, since the battery raplity is clogged and the filters often need to be replaced, Jesper says, and goes on:

–Interest for the product looks to be spreading fast. Enjay has opened business in Holland and Germany and France is next. The company has recently had inquiries from the US, most recently from the shipping industry. Luxury cruisers can save millions by using less heavy fuel oil for heating, he tells.

-When Finland was tasked to scan the world for energy efficiency solutions, Lepido was one of three possible investments. But I would like to add that the ventilation consultants and fitters who are the real heroes. We have developed a tool, but the apply it to the world. 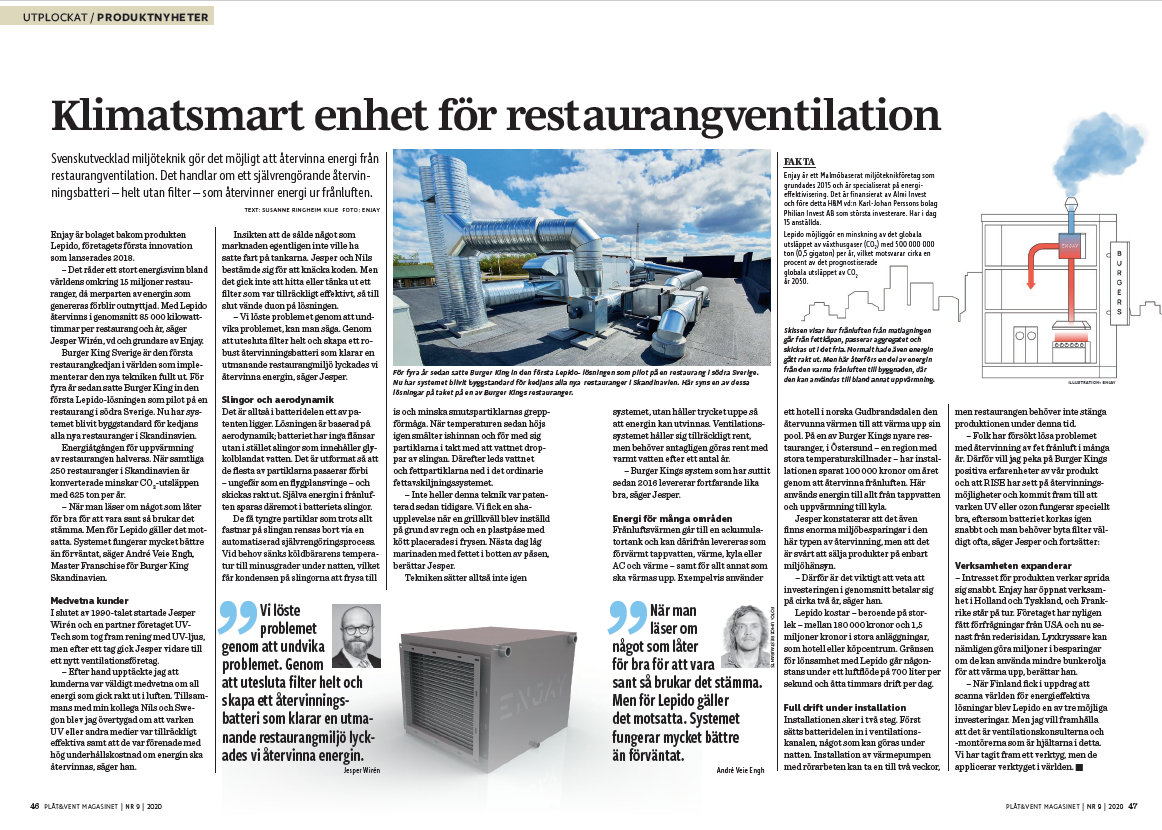